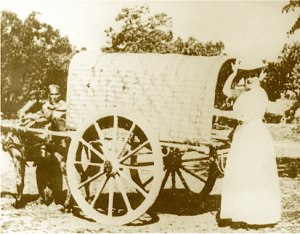 An Answer to the Three Knocks

In 1890, a twenty-year-old American named Ida Sophia Scudder traveled to India to be with her ailing mother. Three men, a Muslim and two Hindus, arrived at her family’s home seeking emergency help for their wives who were having labor complications.

The three young husbands refused the assistance of Ida’s father, a Christian missionary doctor, because of prevailing caste and gender customs. Without any medical training, Ida was powerless to help. The next day, she learned that all three women had died. After reflection and prayer, Ida felt that God was calling her to serve the women of India. She returned to the U.S. to become a doctor, graduating in the first class that accepted women at Cornell Medical College in 1899.

Ida returned to India in 1900 to begin her work as a doctor. With a small gift of $10,000 from a man who wanted to memorialize his deceased wife, she immediately opened a one-bed clinic giving medical assistance to local women who had no other place to go for health care.

By 1902, the 40-bed Mary Taber Schell Memorial Hospital opened, beginning the realization of Ida’s vision – that women should have the same access to quality and compassionate healthcare that men did, regardless of religion or the ability to pay for it.

She dedicated her life to this idea and her legacy continues to inspire people to join her cause.

That tiny clinic has grown into the Christian Medical College (CMC) in Vellore – one of India’s most prestigious private hospitals and medical schools. Today, CMC cares for over two million patients and trains one thousand doctors, nurses and other medical professionals each year.