Innovation In Service of Humanity: An Interview with Dr. Ankit Bharat (Batch ’97) 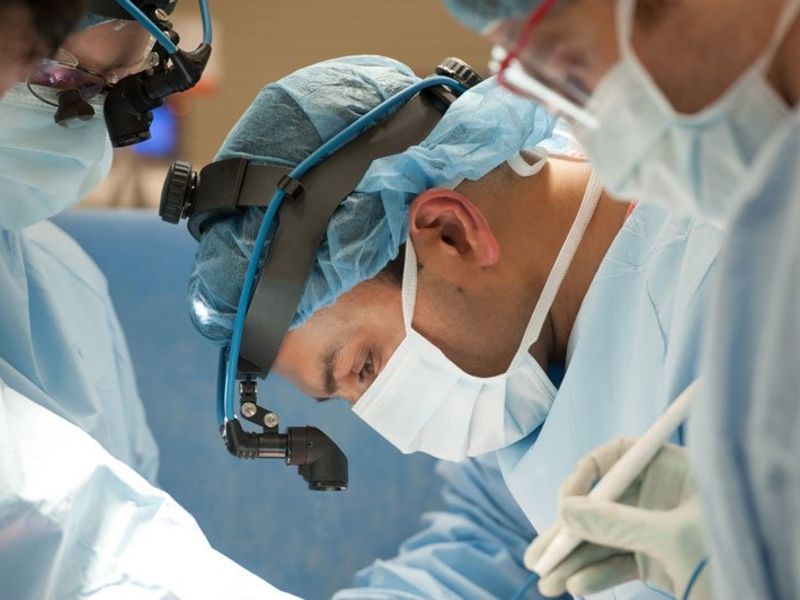 At CMC, you're exposed to some of the most cutting-edge technologies at the main hospital, but then you're also getting posted in some of the most underserved villages and you have to come up with creative solutions to help people.

In June 2020, CMC alumnus, Dr. Ankit performed the first double lung transplant on a COVID-19 patient at Northwestern Medicine in Chicago, IL. Prior to this pioneering achievement, Dr. Bharat had already distinguished himself as a skilled surgeon and scientist. Among many leadership positions and roles, Dr. Bharat is a Harold L. & Margaret N. Method Research Professor of Surgery, and the Chief of Thoracic Surgery at Northwestern University. He has won numerous awards and has published more than 100 peer- reviewed papers in top scientific journals.

After a full night of back-to-back surgeries, Dr. Bharat sat with Foundation Board Chair, Dr. Philip Ninan (Batch ’69), to discuss his most recent achievements, his drive for excellence, and the impact of his CMC education on his personal and professional life.

Philip Ninan: As an outstanding clinician, researcher, and educator, you are “a triple threat” in academic medicine. Tell us a little bit about yourself and how you came to be the professional you are.

Ankit Bharat: I was raised by physicians in Northern India: my dad is a pulmonologist, and my mom is a pathologist. So growing up, I was introduced to the idea of pursuing medicine. After high school, my dad strongly advised me to apply to Christian Medical College (CMC). I trusted his advice and decided to apply to CMC, but I did tell him there was no possible way I [would be one of only] seven open candidates they accepted at the time. I was a fine student in high school, but I was not top of my class.

At the same time, I was applying to universities in the U.S. and had been accepted to the University of Pennsylvania with a pretty good scholarship. I had my dorm room selected and flight booked, but I was called back to CMC [after I had given my written exam]. I made the second trip for a three-day interview process, and I really enjoyed it. They evaluate team leading abilities, the ability to work together, and the ability to support each other, and I realized these are the kind of peers I would love to get trained with.

[CMC] is selecting some really talented people who are not just the best in academics, but they're just go­ing to be great people.

After my medical training at CMC, I came to the U.S. to pursue a career with a heavy focus on basic sciences. At that time and for my level, I was quite exposed to the idea of research. I had worked with Dr. Ramakrishna (Batch ’69), who was writing a lot of important papers in the field, including one in The Lancet. Dr. [Gagandeep] Kang (Batch ’81) was there as well, and she was very supportive of research, and then Dr. Mammen Chandy (Batch ’67), who had run a very successful hematology program at CMC. Very few medical schools at that time gave you that exposure to investigative medicine and fostering that culture of science.

Two years ago, I was asked to take over as the head of thoracic surgery for Northwestern Medicine, which I accepted and have built a team that I’m very proud of.

PN: About six months ago you performed the first double lung transplant in a COVID-19 patient. Can you tell us how that came about and what drove you to that decision?

AB: One of the divisions of the [lung transplant] program was to always think about innovation. When the [COVID-19] pandemic hit, I was one of the members on the COVID-19 task force, and in my capacity as the head of thoracic surgery, and the director of transplant and ECMO programs, I was seeing a lot of patients who were progressing to permanent lung damage and then ultimately dying from the complications of COVID-19 despite the best medical treatment.

So, we thought if we could establish permanent lung damage in a patient and then establish that the virus has been cleared from the body, we could possibly help them by doing a lung transplant. By mid-April we [re-opened] some of our basic science labs, and we started working quite aggressively trying to develop certain techniques in the lab that would allow us to answer those two questions: (1) has a permanent lung injury occurred in the patient? and (2) has the virus left the body?

Then, we needed to understand what the inside of the chest looked like after COVID-19 had destroyed the lungs, so I started a warm autopsies program in patients, which includes going into the patient’s room within one hour of death.

We had also developed other techniques, including matrix imaging that studies the architecture of the lung, and for the first time, we found that in some patients, they end up developing permanent lung damage. We then did a lot of work with single cell RNA sequencing using highly sophisticated technologies, then we developed machine learning based algorithms to predict or recognize patients who have permanent lung damage. We also had to develop another virus testing technique called RNA scope, which allows us to not only visualize the virus in the lungs, but also whether it is replicating or not. Once we combine all this information, then we can identify patients who have permanent damage and who have cleared the virus and then get them to transplant. Ultimately, it stemmed from the recognition of a necessity and seeing a lot of these patients die early on.

PN: Tell us a little bit about your research and how it is the flip side of the coin of your technical work.

AB: I’ll share a story with you, which I haven’t told many people, to emphasize how important research can be. When I came to Northwestern, Alec told me ‘if you are successful, you will be the first trainee to come out of a fellowship and start a lung transplant program from scratch. But then, if you’re not successful, you will also make history as my trainee with the shortest career in surgery”.

The first surgery we performed went well, but about 10 days into the transplant, the patient developed a problem called hyperammonemia syndrome, which affected 5% of all lung transplant recipients globally and kills them. I called Alex because I knew [my patient] was going to die as well. Alex said one of his patients had died in 1986 with the same problem, and now over 30 years later, there was still no solution.

I was very disappointed because this guy was in his 40s, and he trusted me. He was going to be the first transplant recipient. So [with one technician on my team] and some grant funds, I started to investigate. At that point people thought the cause was inborn error of urea cycle metabolism, but it didn’t explain a lot of other things that these patients experienced. So, I took that observation to the lab, and one thing after the other, [this] ultimately led to the discovery of this molecule “ureaplasma”, which we found out later is a donor transmitted infection. This led the discovery of this organism and a cure for a lethal problem that was killing about 5% of lung recipients and now no one dies of it.

So, I think having basic science or any kind of research background, gives us that one extra tool to ask questions and find answers. For me, having those tools allows me to take some technical problems and questions and be in a better position to find those answers.

PN: In many ways you’ve excelled in the path that you have chosen. Do you wonder what if you had taken the alternative path and gone to pre-med at UPenn?

AB: I do not actually ever think about that because I feel that going to CMC was such a perfect decision for me. At CMC, you’re exposed to some of the most cutting-edge technologies at the main hospital, but then you’re also getting posted in some of the most underserved villages and you have to come up with creative solutions to help people. Now we didn’t have solutions all the time but working in a really rural community hospital and having to deliver a twin pregnancy with minimal resources and trying to do your best, helps you understand the importance of innovation and not just taking resources for granted.

The [last] thing is that despite getting one of the best educations, I came out with no student loans from CMC, and that gave me the freedom and flexibility to pursue basic science and do whatever I truly wanted to do. I don’t look back at what would be, but I am 100% convinced that going to CMC was absolutely the right thing for me, and it has played a big role in where I am today.

I don't look back at what would be, but I am a hundred percent convinced that going to CMC was absolutely the right thing for me and played a big role in where I am today. 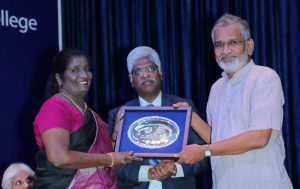 Every year, the Christian Medical College Vellore (CMC), together with the Vellore CMC Foundation, honors Dr. Ida S. Scudder’s legacy by recognizing an individual (or couple) who exemplify her courage, compassion, and dedication to theservice of humanity. At the 11th 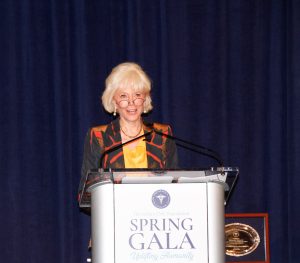 It was an evening highlighted by the presence of CBS Broadcast Journalist, Lesley Stahl, and NPR’s award-winninglegal affairs correspondent, Nina Totenberg. At the Foundation’s 2022 Gala, we paid tribute to U.S. Ambassador-at-Large for Global Women’s Issues, Melanne Verveer, with the 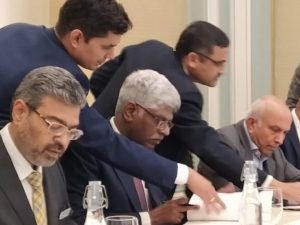 On Friday, May 6, 2022, Fairfax Financial Holdings, along with its business services provider Quess Corp, signed a Memorandum of Agreement (MoA) with the Christian Medical College (CMC), Vellore, to establish a new pediatric specialty care center on CMC’s Ranipet 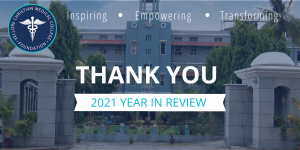 The Foundation and CMC have once again been selected by USAID as an American Schools and Hospitals Abroad (ASHA) grant recipient, a federally funded program that supports infrastructure and capital improvement initiatives. The FY2020 ASHA Grant will support the use of robotics and Artificial Intelligence to help improve physical rehabilitation for people with disabilities.

The Vellore CMC Foundation helps support the Christian Medical College of Vellore, India, one of the largest health care institutions in the world.

Congratulations to the Batch of 2022!

Thanks to the generous support of our donor community in 2022, we will be able to provide 20 of these nursing students with full three-and four-year scholarships!

Lamp lighting ceremony at College of #Nursing, @OffCMCVellore for the dedication of 196 1st yr nursing students of the batch of '22 held recently. Lamps lit by the faculty from Florence Nightingale lamp presented to College by founder Ida Scudder, and passed onto the #students.

'Why are these tropical diseases still neglected? What's coming in the way of their elimination?' @NatureInd & @DNDi spotlights neglected #tropical #diseases in a podcast featuring @PriscillaRupali & Winsely Rose from @OffCMCVellore with 3 other speakers. https://bit.ly/3iczy8t

As you consider how you’ll create positive change through your end-of-year giving, I invite you to consider making a donation to the Ms. Aleyamma Kuruvilla Scholarship Fund. Through this fund, we are trying to support the sponsorship of twenty (20) new underprivileged students t